Mexico’s Senate on Thursday overwhelmingly signed off on a landmark cannabis bill that could pave the way to the creation of the world’s largest legal marijuana market if the initiative passes the next hurdle in the lower house of Congress.

Mexico City lawmakers are now rushing to secure final approval before the end of the current congressional session December 15.

If enacted, the reform would very well mark a major shift in a country where drug cartel violence has left more than 250,000 people dead since former President Felipe Calderón declared war on criminal organizations.

Senators voted 82 to 18 to approve the measure, with seven abstentions. 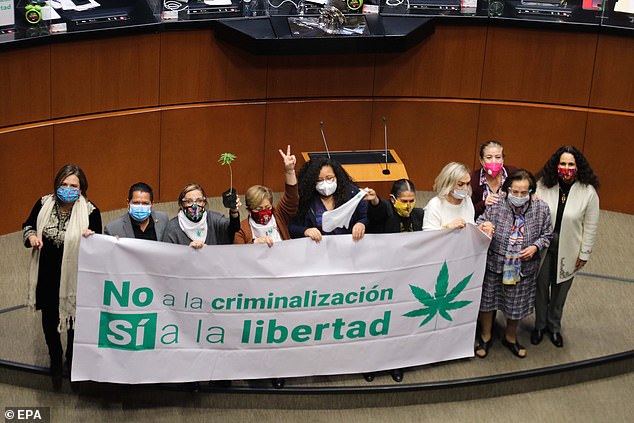 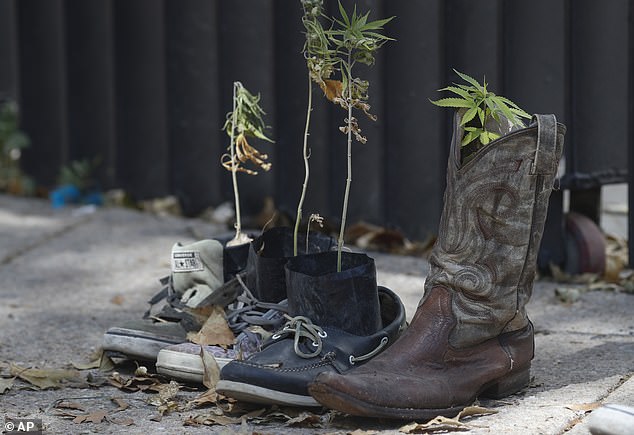 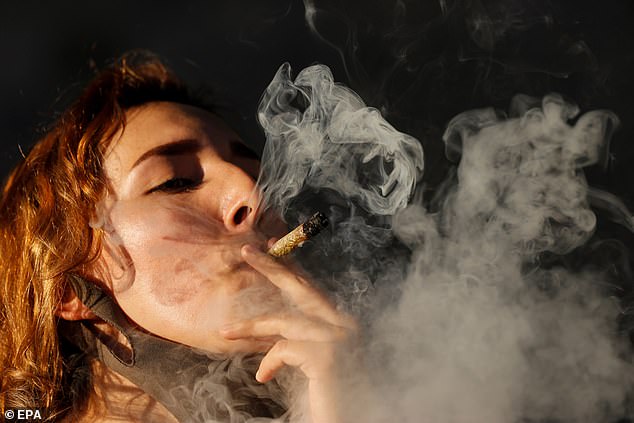 A person smokes marijuana at a protest in favor of the drug’s legalization Thursday in Guadalajara, Mexico

President Andrés Manuel López Obrador’s left-of-center Morena party supported the initiative and holds a majority in both chambers of Congress with its allies.

‘Cultivation, processing, marketing, exportation and importation and use for research purposes of cannabis are regulated. Medical and pharmaceutical use is regulated and established in the General Law of Health,’ said Senate Majority leader Ricardo Monreal.

‘With this law, people can access cannabis under clear criteria, through licenses related exclusively to cultivation, transformation, commercialization, exportation, importation and investigation.’

In November 2018, the Supreme Court ruled in that recreational marijuana should be permitted, just one year after lawmakers legalized it for medicinal use. 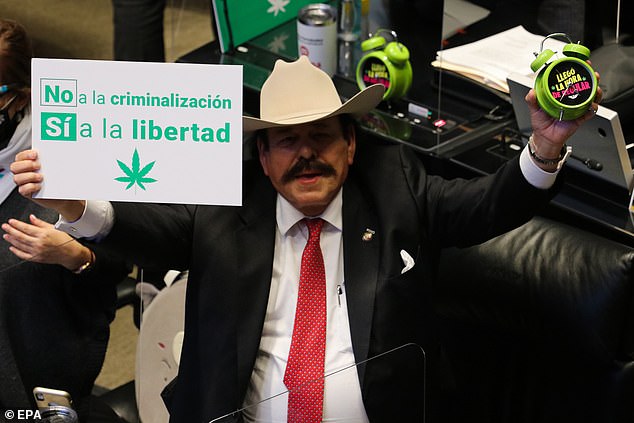 Senator Armando Guadiana celebrates after the passing of a bill to legalize marijuana. The reform would very well mark a major shift in a country where drug cartel violence has left more than 250,000 people dead since former President Felipe Calderón declared war on criminal organizations 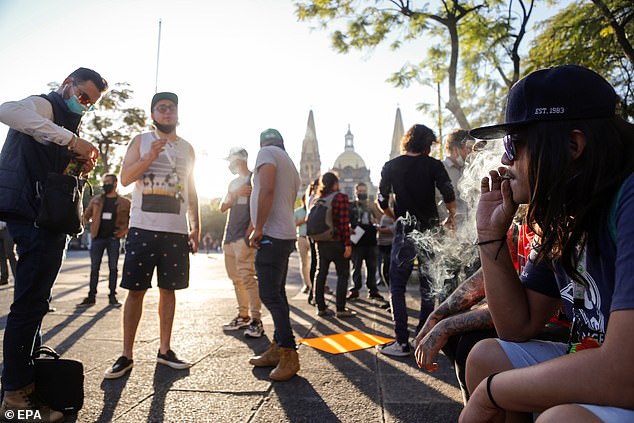 People smoke marijuana during a demonstration in favor of the drugs legalization and regulation, in Guadalajara, , Mexico, 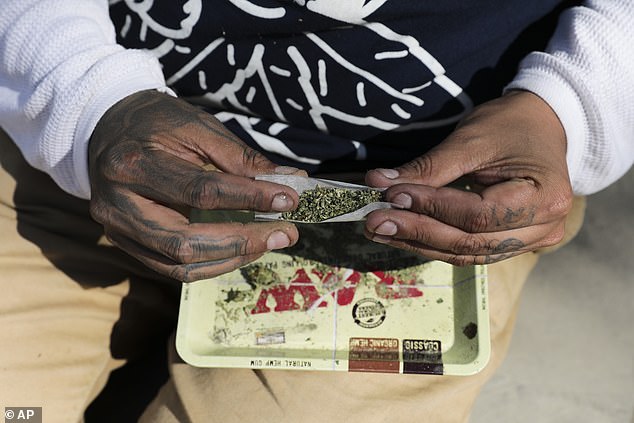 The socially conservative López Obrador has shied away from publicly backing the legalization push, but neither has he opposed it, and senior cabinet members like Interior Minister Olga Sanchez have openly called for a shift to legalization and regulation.

According to the Drug Policy Program of the Center for Economic Research and Education, at least 41% of the inmate population in federal prisons were jailed for drug offenses in which they were arrested with narcotics that were worth less than $25.

Morena Senator Jesusa Rodríguez said the bill, which aims to ‘improve living conditions,’ finally legalizes a sector that has been under the control of warring cartels.

The farming and production companies will have access to 40% of the cultivation licenses that will be handed out.

The legislation grants users the permit to possess up to 28 grams and grow up to six plants at home or eight if there are two consumers of legal age living at the same residence. 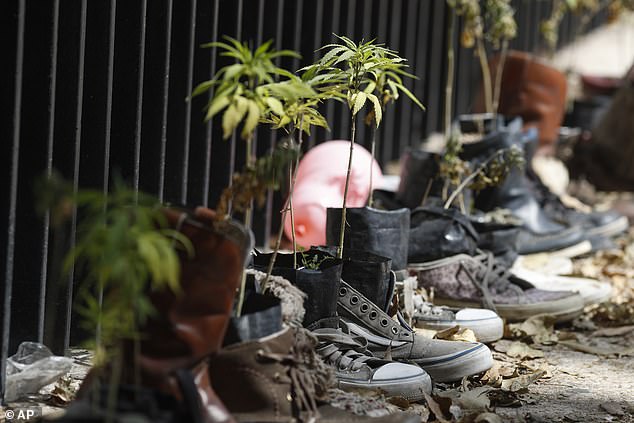 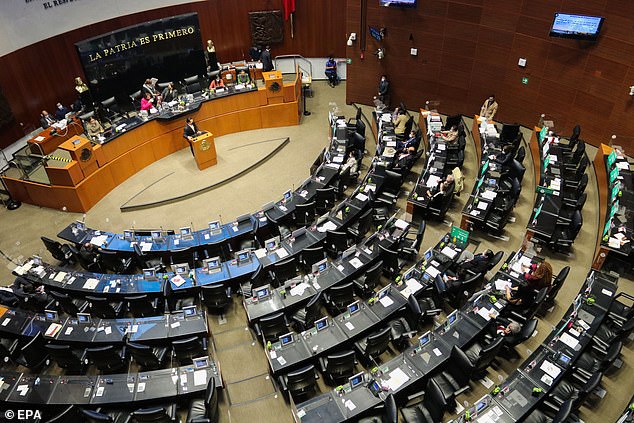 Senators in Mexico voted 82 to 18 to approve the legalization of marijuana, with seven abstentions

Sales to adults in authorized businesses would be allowed, provided the product abides by maximum levels of psychoactive ingredients.

Children would be prohibited from using the drug or any involvement in its cultivation and sales, and driving while under the influence of marijuana would be illegal.

National Action Party Senate Minority leader Damián Zepeda said his legislators largely opposed the measure because ‘it is not the Mexico that we want for our children and citizens’ children.’

‘Tomorrow they are going to go smoking in the park because they only get a fine, not even an administrative arrest,’ Zepeda said. ‘Tomorrow it is going to be the neighbor smoking, the smoke and the smell reaching our children, and there is no way to avoid it.’

Weed companies have expressed interest in a future Mexican legal market, including Canada’s Canopy Growth and The Green Organic Dutchman, as well as a unit of California-based Medical Marijuana Inc.

Come and Take a Look…

Capitol Rioter Who Said He…

Republicans are betraying the baby…