In the 17th century, a heated debate blew up between two orders of Catholic monks over whether or not chocolate was officially a drink – and could therefore be consumed on days when they were fasting. Eventually Pope Alexander VII intervened, decreeing that chocolate was indeed a drink (and presumably bringing joy to many hungry monks). 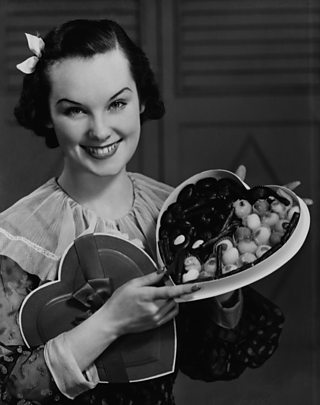 A young woman receives a heart-shaped box of chocolates on Valentine’s Day, circa 1935

5. Chocolate used to be associated with rebellion

While in France and Spain chocolate was initially a drink reserved for the privileged, in England it was consumed by intellectuals and political thinkers. In the 1660s, Charles II felt so threatened that he tried to close down the chocolate and coffee shops where rebels and radicals congregated.

Solid chocolate was finally invented in 1847. Once the big brands began to industrialise, chocolates with fondant centres became hugely popular. They were sold in handmade boxes decorated with silk, tassels and lace, with names like Cadbury’s The Fancy Box.

By the 1930s, these ornate confections were still popular – and not at all cheap. One box from Rowntree’s was priced at 100 shillings, when the rent for a slum dwelling at the time was 10 shillings a week.

7. Some of our most popular chocolate bars are almost 100 years old

Many of the our best-loved chocolate bars were invented during a golden age of cocoa-based creativity in the 1920s and 1930s. Products launched at this time include the Cadbury’s Flake, Fruit and Nut, and Crunchy bars in the 1920s, the Mars Bar in 1933, the Milky Way and the KitKat in 1935, Maltesers in 1936, and Aero and Smarties in 1937.

The first fondant eggs were launched in the 1920s, but the celebrated Creme Egg was originally a Fry’s product, and wasn’t branded as Cadbury’s until later.