“It’s hard to see the bar anymore since it’s been pushed so far down the last few years, but President Trump’s behavior over the weekend was a new low.”

That was the assessment an FBI agent who works in counterintelligence gave Insider of President Donald Trump’s performance at this year’s G7 summit in Biarritz, France. The agent requested anonymity because they feared that speaking publicly on the matter would jeopardize their job.

Trump’s attendance at the G7 summit was peppered with controversy, but none was more notable than his fervent defense of Russia’s military and cyber aggression around the world, and its violation of international law in Ukraine.

Trump repeatedly refused to hold Russia accountable for annexing Crimea in 2014, blamed former President Barack Obama for Russia’s move to annex it, expressed sympathy for Russian President Vladimir Putin, and castigated other G7 members for not giving the country a seat at the table.

Since being booted from the G8 after annexing Crimea, Russia’s done little to make up for its actions. In fact, by many accounts, it’s stepped up its aggression.

In addition to continuing to encroach on Ukraine, the Russian government interfered in the 2016 US election and was behind the attempted assassination of a former Russian spy in the UK. US officials also warn that as the 2020 election looms, the Russians are stepping up their cyberactivities against the US and have repeatedly tried to attack US power grids. 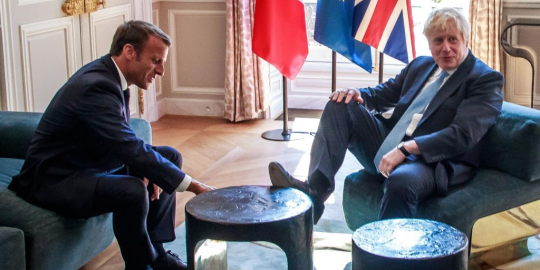 “What in God’s name made Trump think it would be a good idea to ask to bring Russia back to the table?” the FBI agent told Insider. “How does this serve US national-security interests?”

Trump’s advocacy for Russian interests is renewing concerns among intelligence veterans that Trump may be a Russian “asset” who can be manipulated or influenced to serve Russian interests, although some also speculate that Trump could just be currying favor for future business deals.

‘We have a Russian asset sitting in the Oval Office’ 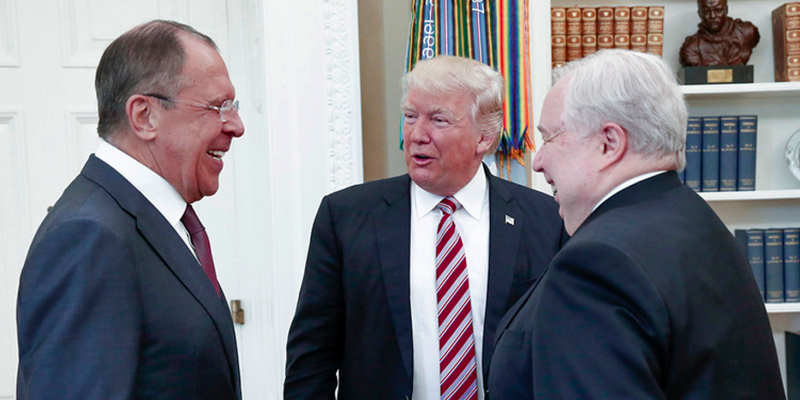 A former senior Justice Department official, who worked closely with the former special counsel Robert Mueller when he was FBI director, didn’t mince words when reacting to Trump’s performance at the G7: “There is no fathomable explanation for why the president said these things. Letting Russia off the hook for bullying smaller countries and then blaming Obama for it? It’s directly out of the Putin playbook. We have a Russian asset sitting in the Oval Office.”

In arguing for Russia to be invited back into the G7, Trump said the country would be helpful in addressing hot-button issues like Iran, Syria, and North Korea and that the alliance was better off with Russia “inside rather than outside.”

But Russia is a staunch ally of Syria’s Assad regime, and it’s also cozied up to Iran in recent years. US military and intelligence officials view Russia as one of the US’s foremost rivals, which is generally in opposition to American interests.

Glenn Carle, a former CIA covert operative and frequent Trump critic, told Insider there’s been “no question” in his mind for years that the president is behaving like “a spy for the Russians.”

“The evidence is so overwhelming that in my 35 years in intelligence, I have never seen anything so certain,” Carle said, adding that he’s spoken with several intelligence veterans about the matter in the four years since Trump first launched his presidential campaign, many of whom believe Trump’s actions are a threat.

Read more: Russia came out the winner of this year’s G7 summit despite being kicked out, and Trump looked like ‘Putin’s puppet’

“Intelligence assets become convinced to be spies for multiple reasons,” Carle, who specialized in getting foreign spies to become turncoats when he was at the CIA, said in an earlier interview with Insider. “It might start with kompromat or financial hooks, and the asset may be convinced he is acting as a patriot until he becomes accustomed to his role.”

“Trump clearly responds favorably to praise,” he said. “And over the years, the handling officer – Putin, in this case – realizes what the asset wants, and that’s what they provide. Trump wants to be told he’s the greatest, so that’s what you tell him, over and over again, until he comes to believe that is the motivation for his actions.”

‘A useful idiot’ or ‘currying favor’ 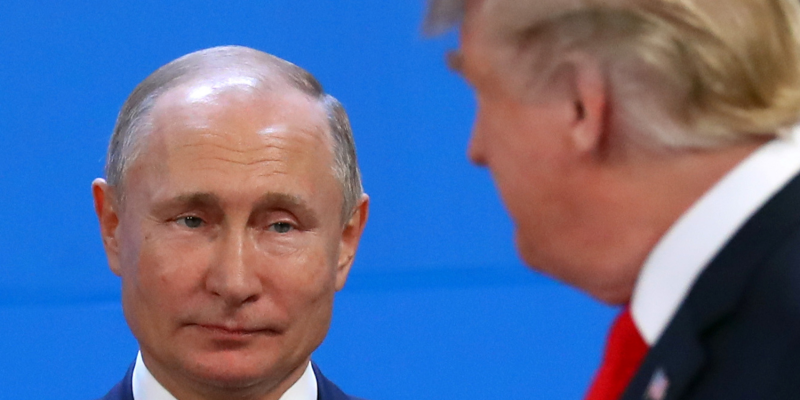 Frank Montoya Jr., a recently retired FBI special agent, told Insider it’s “hard not to think the Russians have an asset in the White House.”

But he added that Trump’s freewheeling and often false statements imply he’s “not playing with a full deck on any matter of state these days. Still, those same delusions are what give me pause when conclusions are reached about the likelihood he is a Russian asset.”

“Useful idiot is more like it,” Montoya said. “That said, given the sheer number of unreported contacts Trump’s people had with the Russians before the election … not to mention any continued contacts after the election, it would not surprise me in the least if the Russians had at least one asset in Trump’s inner circle.”

Robert Deitz, a former top lawyer at the CIA and the National Security Agency, agreed that Trump was catering to Putin’s interests, but he disagreed on why.

“I think what’s going on right now is an Occam’s razor scenario,” he told Insider, referring to the philosophical theory that the simplest explanation for an event is often the correct one.

“Trump wants to do deals with Russia when he leaves the presidency,” Deitz said. “We already know he was interested in building a Trump Tower in Moscow before and during the election. The best way of doing a deal with Putin is to be nice to him, so I think what Trump is doing is currying favor.”

He emphasized, however, that regardless of Trump’s motives for being subservient to Putin, “it’s still harmful to the US because Russia is not a friend.”

“When Trump goes to bed each night, what do you think his last thoughts are: the welfare of the United States, or the size of his bank account?” Deitz added.

Trump’s defense of Putin at the G7 didn’t go unnoticed in Russia.

According to The Washington Post, one show on the state-run Rossiya-1 network played a celebratory soundtrack as it showed six video clips of Trump demanding that Putin be given a seat at the table.

One anchor rejoiced that “Trump is dancing to Putin’s tune,” while others were amused by the “maniacal persistence” with which Trump was lobbying for Russia.

Read more: Trump’s G7 performance shows how he’s living in a totally different reality and isolating the US from the rest of the world 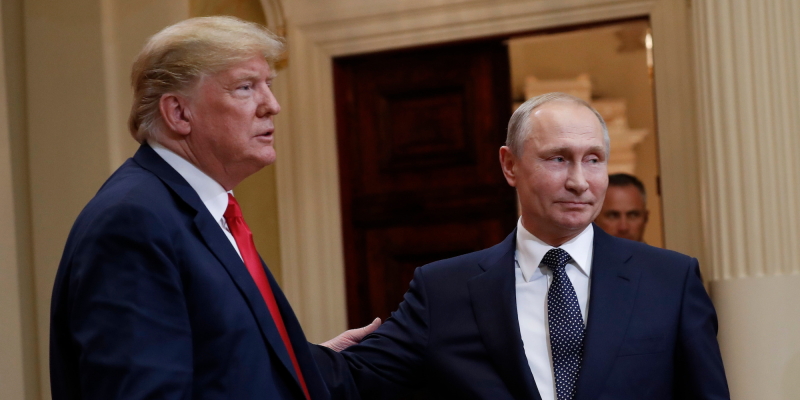 This isn’t the first time the president has been accused of working to advance Russia’s interests ahead of the US’s.

Perhaps the sharpest example of this was when Trump and Putin held a bilateral summit in Helsinki last year. After the meeting, Trump stunned the US national-security apparatus and foreign allies when he sided with Russia over the US intelligence community, blamed “both sides” for the deterioration in US-Russia relations, and praised Putin as being “extremely strong and powerful.”

In 2017, Trump refused to accept the US intelligence-community finding that Moscow meddled in the 2016 race to propel Trump to the presidency.

That May, he fired FBI director James Comey, who was overseeing the FBI’s investigation into Russia’s election interference and cited “this Russia thing” as the reason. Two days after firing Comey, Trump shared classified intelligence with two Russian officials in the Oval Office and told them firing Comey had taken “great pressure” off of him.

Shortly after, the FBI began investigating whether Trump was a Russian agent.