The loot included a rare 400-year-old shimpaku tree, a star of the bonsai world, which was due to be entered in a Japanese beauty competition this month.

The prize shimpaku alone was worth over 10 million yen ($90,000), according to Fuyumi Iimura, wife of the bonsai master who crafted the trees.

“We treated these miniature trees like our children,” she said. “There are no words to describe how we feel. It’s like having your limbs lopped off.”

Iimura added that those responsible for the thefts, committed over a series of nights last month, were likely professionals, as they had identified the “most valuable trees” from the couple’s roughly 5,000 hectare park, which has around 3,000 bonsai trees.

Also abducted were three miniature pine trees, called goyomatsus, and a trio of less-valuable shimpaku, a juniper tree which is now rare in the wild.

Four centuries’ worth of work

Fuyumi Iimura’s husband, Seiji Iimura, is a fifth-generation bonsai master whose family practice dates back to the Edo period (1603-1868).

Originating from the Chinese ancient art of “penjing,” or miniature landscaping, bonsai was introduced to Japan in the 6th century by a group of Japanese Zen Buddhism students returning from their overseas travels. 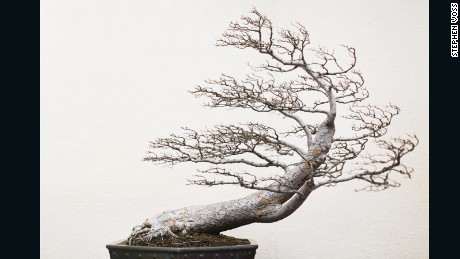 They dubbed it “bonsai”, which literally means “planted in a container,” and — at its most elementary level — the art is simply growing a wild tree inside a small vessel.

While some bonsai grow from seeds, creating the shimpaku is a laborious process, not least because the original trees are dangerous to collect, growing on precarious cliffsides.

Iimura said that the 400-year-old stolen tree had been taken from a mountain centuries ago. Through an in-depth knowledge of plant physiology, Iimura’s family had gradually shrunk the tree to its miniature form. It measured one meter (3.2 feet) tall and around 70 centimeters (2.3 feet) wide when stolen.

“It’s not something that can be done overnight,” said Iimura.

‘They can live forever’

Stolen bonsais can fetch a small fortune on the black market, and have been known to be shipped abroad to Europe, said Iimura. Some artisans have spotted their bonsai on social media sites, she added, but few have been able to reclaim their tiny trees.

Ideally, the couple want their bonsais to be returned, but failing that they appealed to the thief to take good care of their miniatures.

“I want whoever took the bonsais to make sure they are watered. The shimpaku lived for 400 years. It needs care and can’t survive a week without water,” said Iimura.

“They can live forever — even after we’re gone, if they receive the proper care.”